I went to the Road Atlanta Performance Handling School when I was 16. My dad, a former rally driver, wanted to make sure I knew what I was doing if I had a driver’s license, but I was in love with racing long before I knew anything about car control. I attended my first race at only 4 weeks old, and I’ve lost count of the number of race weekends between now and then.  In June 1999, at 18 years old, I went to my first autocross: Dad was out of town, but some of his old SCCA buddies still hung around so, me being me, I went to the autocross by myself; figuring I’d know someone or meet someone nice enough to show me around. As it is, I only knew one person on site, but I made lots of friends, and I managed to finish 3rd in my class. 🙂

Fast forward five years, and I went to SCCA driver’s school in a Spec Miata in February 2004. I don’t remember where I raced first, but I distinctinly remember racing at Barber Motorsports Park in August of that year. It was 4 billion degrees, terribly unorganized, and I was sick all weekend.  I kept telling Steve how ill I felt, and I was laid out between on track sessions. We just figured it was the heat, but a few days after we got home, I was still sick, and it was then we learned I was pregnant. So, as it turns out, I was about six weeks pregnant when I impacted the tire wall at turn one at Barber Motorsports Park. Hahaha! I ran wide, hit the marbles, and slid off the track on the last lap of my race. Ugh! No harm done, other than tearing off the right front corner of the car.

In March 2005, we were Blessed with a beautiful baby girl. Six weeks after her delivery, my doctor cleared me for any of my normal activities. “Anything?” I asked. “Yes, anything you normally do,” Dr. Gallery said. I wasn’t going to elaborate or ask twice.

That afternoon, we packed up and left for Roebling Road Raceway. 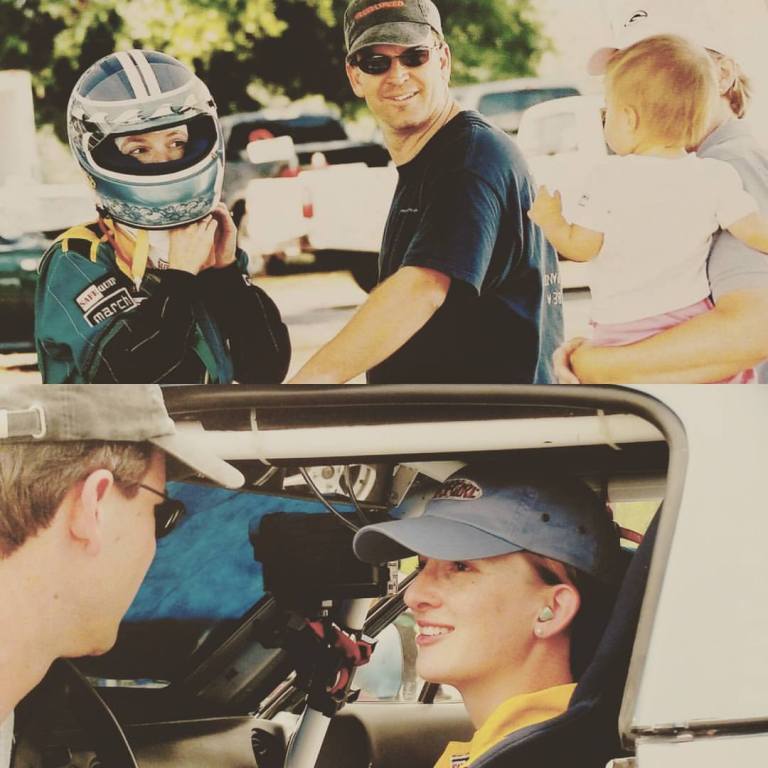 In Saturday’s race of that weekend, I was exiting turn one when I got nailed in the right front wheel. I was on the inside of a large group and making a pass, so getting hit from that side was a complete surprise…no one should have been on the inside of me unless they were four wheels off in the grass. Because the suspension was directly impacted, the steering wheel was jerked out of my hand, and I spun off driver’s left. Dust filled the car, and by the time I could see to get back on track, the whole pack had passed. (Insert disappointed huff.) I finished the race, but well back from where I had begun.

Now, here comes my dad’s favorite part of the story: After the race, I was talking with my family when the driver who hit me, Mat Pombo, now of MINI John Cooper Works Racing Team (IMSA Continental Tire Series), came to our paddock to apologize.  My back was to Mat as he approached, and when he called out, I turned around cradling my 6 week old daughter. He stopped dead in his tracks. “Man, you really know how to make a guy feel bad!” he said, laughing. I didn’t think anything about it: I was a racecar driver and a new mom. 🙂 He went on to explain that he had been in the lead when he was pushed off on the front straight and was making a wild attempt to get back to the front when he went off the inside of turn one, and came back on track, into me. We shook hands, and Mat and I remain friends, but my Dad rarely misses an opportunity to tell that story when Mat’s name comes up at the track. 😉

I stopped racing in 2006 when MK was just over a year old. In fact, the photos above are from my last competition weekend. Many people, when they heard I was retiring, sagely nodded their heads and stated, “Yeah, it’s different when you have kids.” But I didn’t quit because I had a child. My family was committed to helping care for her so I could race, and it never once crossed my mind that I might be hurt and therefore jeopardize my future with my daughter. It never crossed my mind that I might get hurt. Period. I would rather race and set an example for my daughter to show her that you should make time for the things you enjoy. Live life to the fullest. Try something new. Have fun! That’s the example I strive to set for my daughter…then and now. Besides, I raced because I loved it.

I quit racing, however, because I battle a neuromuscular disorder called Charcot-Marie-Tooth, a painful condition that affects my feet and lower legs, and the energy and effort expended during a race weekend meant I paid for it for 3-4 days afterwards. The little time I had on track wasn’t worth the days of painful recovery. My feet were reconstructed in 2001, and I’ve had 12 total procedures. I still attend many race weekends throughout the year. It’s hard not to when your family’s time and money is invested in something like Panic Motorsports, but it’s still also very much a love for me. Only now, I go on crutches or in a wheelchair. I’m still striving to show my daughter that no matter what might be in her way, it is within her power to make her life as fun, or as boring and useless, as she desires.  I hope she chooses fun. 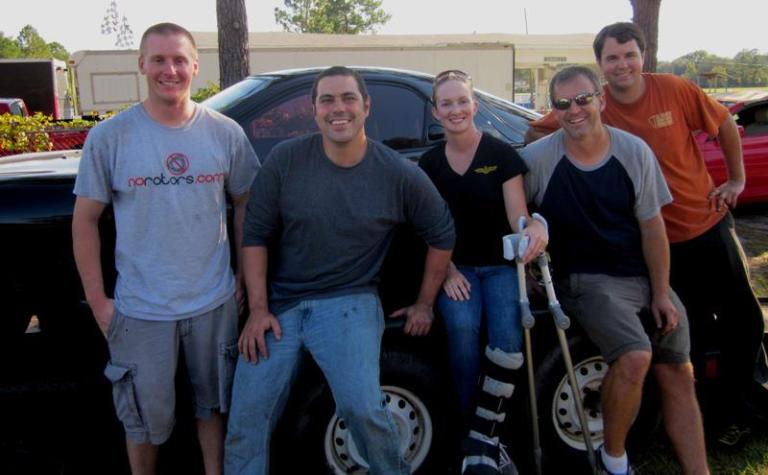 I had to give up my beloved 5-speed 1995 Dodge neon ACR, my first car, when the clutch pedal became too much of a daily challenge, but Steve has kept me supplied with several fun automatics. A week or so before my last track day (pictured above), I fractured my left foot, so I hobbled around and drove my 450hp third gen RX-7 LS1 swap in a cast. I haven’t been on track in a couple years, but I am well known in the school pick-up line for my little red 300hp sports car. 🙂 Whether it’s racing, baking cakes, playing music, travelling, or reading, PLEASE teach your kids to make time for the things they love. Yes, life can give you constraints, but there are always levels of participation to fit your budget, schedule, and physical abilities. You just have to find a way.

I’m a mom, wife, artist, and former racecar driver. Like other moms out there, I can only pray that I have and continue to set a proper example for my daughter, but I think she’s had a pretty good start.